“Blah! Blah! Blah!” The children of Miri’s planet rejoice! Think Geek has a brand new Star Trek Enterprise Light Up Feeding System for infants aged 12 months and older. Priced at $24.99, the system includes both a light up bib featuring an animation styled Deep Space Station K7 and Klingon battle cruiser and a light up 8.5” long and 3” wide USS Enterprise with detachable spoons.

The futuristic set helps bring the “airplane is coming in for a landing” feeding strategy into the 23rd century. Think Geek is continuing their line of usable “collect-edibles” type of products, with previous items including Star Trek themed “sporks” and the awesome Enterprise shaped pizza cutter.

For parents who wish to raise their children properly, meaning as Star Trek fans, they could check out the feeding system in action with this video from Think Geek.

For more information, check out the Think Geek website 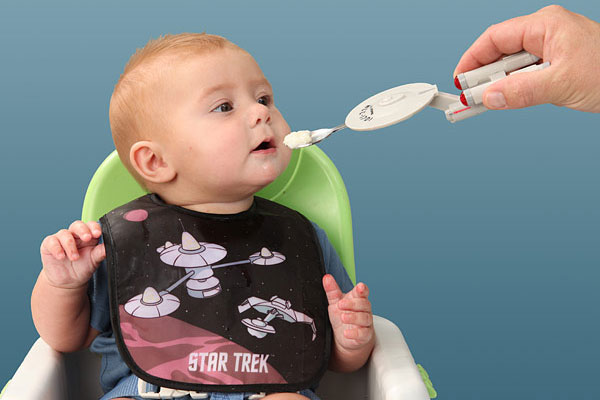 Maria Jose and John Tenuto are both sociology professors at the College of Lake County in Grayslake, Illinois, specializing in popular culture and subculture studies. The Tenutos have conducted extensive research on Star Trek’s history, and have been invited to present at venues such as Creation Conventions, ReedPOP’s official Star Trek 50th Anniversary Convention, the St. Louis Science Center, and to the towns of Riverside, Iowa (future birthplace of Captain James T. Kirk) and Vulcan, Alberta, Canada. They have appeared in episodes of the Netflix TV show “The Toys that Made Us” and in the Decades Network documentary “Through the Decades: Star Wars 40th Anniversary.” They’ve written for the official Star Trek Magazine and their research has been featured on BBC Radio, WGN News, CBS News, and in the USA Today and WIRED Magazine.