Paramount Pictures has announced that two of their biggest hits at the box office this summer will be re-released for one week during the Labor Day holiday. J.J. Abrams’ Star Trek Into Darkness along with World War Z will return to select nationwide theaters with showings in 3D and 2D. The showings begin Friday, August 30th and run through Thursday, September 5th.

Star Trek Into Darkness was originally released to U.S. theaters in May and stars Chris Pine, Zachary Quinto, Zoe Saldana, Karl Urban, Simon Pegg, Anton Yelchin, John Cho, Benedict Cumberbatch, Peter Weller, Bruce Greenwood and Alice Eve. The film is now available as a digital download on iTunes and is set to be released on DVD and Blu-ray on September 10th. 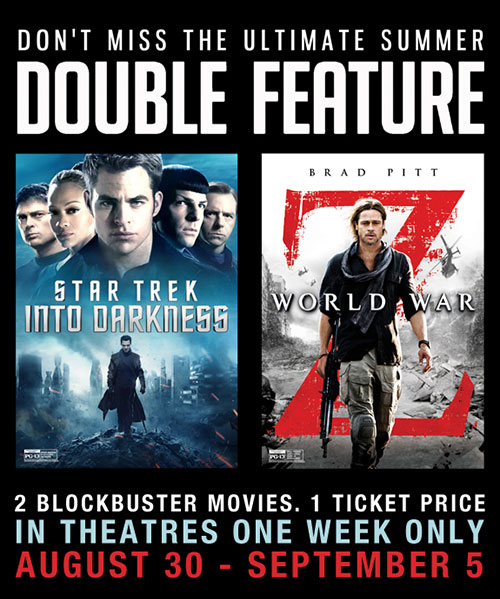 Will you head out to the theater this weekend to see the double feature? Tell us in the comments below.