This weekend, EPIX will present a special programming event, Shatnerific: A Celebration of Star Trek Fandom. The event will not only feature William Shatner’s latest documentary film, Get A Life!, but also last year’s The Captains documentary and 11 Star Trek feature films.

The special event, which takes place July 28 – 29, will be available on the Xbox LIVE dashboard, making this premium programming, normally available only to Xbox LIVE Gold customers, accessible to all Xbox LIVE subscribers.

EPIX is currently offering a free two-week trial of their service on EpixHD.com, without the need submit credit card information, at http://www.epixhd.com/freetrial/.

Scroll down to read the press release. 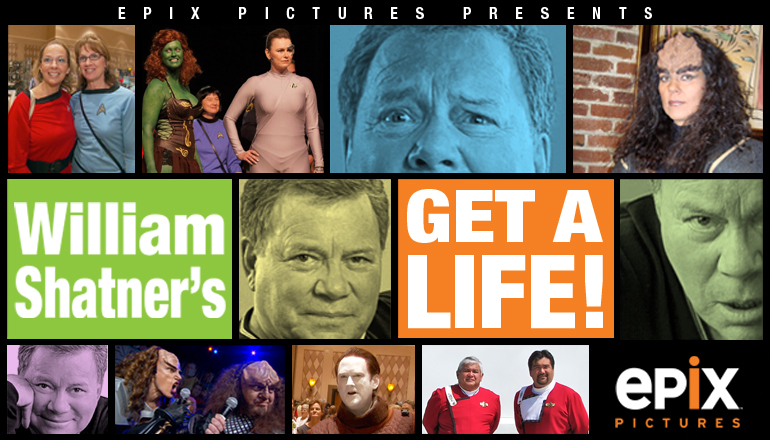 Star Trek Celebration to feature EPIX Original Docs William Shatner’s Get a Life! and The Captains plus 11 Star Trek Movies

NEW YORK–(BUSINESS WIRE)–EPIX, the premium entertainment network, today announced a free preview of the EPIX app on Xbox 360® along with a special programming event, Shatnerific: A Celebration of Star Trek Fandom, bringing together EPIX Original Documentaries about the franchise with 11 popular Star Trek movies to be made available July 28 – 29. A featured event on the Xbox LIVE dashboard, the Star Trek Celebration will make premium programming normally available only to Xbox LIVE Gold customers accessible to all Xbox LIVE subscribers.

Following up the success of the EPIX Original Documentary The Captains, an in-depth look at the Star Trek franchise through the experiences of each actor who has played a Starfleet captain, Shatner returns with William Shatner’s Get a Life! which explores the flip side of the coin in the Star Trek phenomena: the fans.

Along with the EPIX Original Documentaries, the Celebration of Star Trek Fandom will also feature an Xbox 360® exclusive presentation of all 11 Star Trek films, from the original Star Trek: The Motion Picture (1979) to the most recent Star Trek (2009).

“Xbox is a great partner for EPIX and we are thrilled to offer this unique experience to the massive fan base that the Star Trek franchise enjoys. Through this partnership we are able to reach an expanded audience that is using Xbox 360 and engage fans with our content to drive even greater awareness of our multiplatform offering,” said Mark Greenberg, EPIX CEO and President.

About the EPIX Original Documentary
William Shatner’s Get a Life! – Premiering July 28 at 8pm EST
Based on Shatner’s hugely popular book (in response to his now infamous skit on SNL), this film examines the mystery, longevity and the cultural phenomena of Star Trek and its long-obsessed fans known as “Trekkers.” On the surface, the film is an exploration of strangers who have for years attended conventions which looked foolish and almost laughable to some – but Shatner discovers the many secrets and hidden motives behind these individuals’ compulsion to attend these events. The end result is a film that reveals a fun and touching side of the fanfare surrounding Star Trek, and examines the thrill of what’s happening at these fantasy conventions and the enduring popularity of the film and TV series as Shatner further embraces his role as Captain James T. Kirk and his own impact.

About the EPIX Original Documentary
The Captains
An EPIX original documentary produced and directed by William Shatner, The Captains follows the iconic star as he travels the world to connect with each of the actors who have played captains over the long life of the Star Trek franchise including Patrick Stewart, Kate Mulgrew, Scott Bakula, Avery Brooks, and Chris Pine.

EPIX is the newest premium entertainment network delivering the latest movie releases, classic library titles, plus original films, comedy, music and sports events on TV, on demand, online and on devices. Launched October 2009 as the first multiplatform premium network with online accessibility for subscribers through EpixHD.com, EPIX pioneered the development and proliferation of TV Everywhere for American consumers. EPIX was the first premium network to launch on Xbox consoles, first on Android tablets and phones, first on Roku® players and is available to authenticated subscribers on hundreds of devices including Apple® iPads®, iPhones®, Samsung® Smart TVs and Blu-ray™ players and more. Today EPIX remains the only premium service providing its entire monthly line-up from new Hollywood hits to original programs on all platforms and provides more movies than any other premium network.