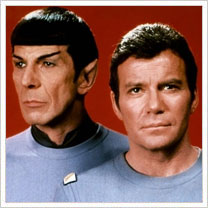 I have to admit, living in Southern California has its benefits. Great beaches, some amazing weather, tons of entertainment, and of course with Hollywood in the area, a good amount of Star Trek related happenings.

Next month, The Egyptian Theater will be showing the six original Star Trek films over four days. Three of the films will be presented in 70 mm. Following Star Trek VI The Undiscovered Country, writer-director, Nicholas Meyer will be taking questions and talking about his time working on the film.

Here’s the information from American Cinematheque.

STAR TREK III: THE SEARCH FOR SPOCK, 1984, Paramount, 105 min. At the end of “The Wrath of Khan,” Spock’s dead … or is he? Leonard Nimoy portrays the lovable, logical Vulcan and makes his directorial debut with the film that answers that question. Guests to be announced

70mm Print! STAR TREK IV: THE VOYAGE HOME, 1986, Paramount, 119 min. Dir. Leonard Nimoy. The most accessible “Star Trek” film ever made sets its previously galaxy-spanning adventures on a contemporary Earth with a healthy dollop of humor.

70mm Print! STAR TREK V: THE FINAL FRONTIER, 1989, Paramount, 107 min. Dir. William Shatner. When Spock’s half-brother hijacks the Enterprise in an obsessive attempt to find God, Captain Kirk and his crew must find a way to outwit him and save the ship from total destruction. Discussion between films with actor Walter Koenig.

70mm Print! STAR TREK VI: THE UNDISCOVERED COUNTRY, 1991, Paramount, 110 min. Dir. Nicholas Meyer. With the Klingon world threatened by irreversible ecological disaster, the Federation and the Klingon chancellor (David Warner) offer an olive branch to each other to save the race, and Captain Kirk (William Shatner) is chosen as the Federation’s representative. Things go quickly downhill when a very high-ranking Klingon is assassinated, and Kirk and Dr. McCoy (DeForest Kelley), framed for the murder, end up in a wintry, gulag-style labor camp. With Christopher Plummer. Discussion following with writer-director Nicholas Meyer moderated by Geoff Boucher of the Los Angeles Times and HeroComplex.com